I wanted to share with you this nice little lucky streak I had!!!  No, not gambling ... Giveaways!!!
I won THE most adorable apron through a generous giveaway from Pam at RetroRenovation.  Pam's blog was the first blog I ever followed - DAILY.  I think I have followed her since Retro Renovation's inception!

The apron is made by Bella Pamella and I got to choose which style I wanted.  I chose the "Nora" in Ruby Dot.


I did wear the head wrap one day when I was doing some cleaning and laundry.  I don't have a picture of me wearing it, but I'll tell you, I thought I was pretty cute!!!  LOL!

Now this next giveaway I won through FB by The House That Lars Built, a blog written by the lovely Brittany Watson Jepsen in Denmark!


I am going to let these pictures speak for themselves.  The photos in it are gorgeous.  When I get into my "jewelry-making" mode again, I will be attempting something from this book!

Thank you, Brittany!  I 'm really enjoying it!! Posted by RetroSandie at 6:30 PM 8 comments:


Well as most of you may know - today was Hurricane Sandy day!  I thought I would share a few pix taken by fellow Rhode Islander Jim Taylor.  No, I stayed in, warm and DRY!!  But the wind blew pretty hard and the rain poured down.  I hope everyone everywhere is safe tonight!! 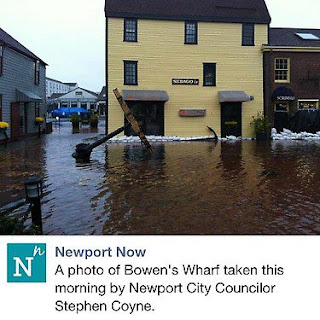 So, it was pretty nasty down by the water.  I think poor New Jersey got hit quite badly, along with Virginia Beach.  Higher elevations in Virginia got a blizzard!!!  Thank goodness we didn't have to deal with anything like that here.  It started out chilly, but the temp has risen.  Lots of folks without power.  So glad I am not one of them.

Have a good evening and tomorrow I want to show you something really cute!!!!

Wow, I was so busy the end of last week and over the weekend - where the time went I don't know ...  Today found me feeling just a little under the weather, so besides saying hello I think maybe I will do my new little story tomorrow.  Until then, have a pleasant evening - and don't forget to watch "The Voice"!!!

Posted by RetroSandie at 8:00 PM 3 comments:


This is just a quick little post - I couldn't sleep because all I could think about was html codes and how to get my signature on the bottom of my post!  I know, I know, don't laugh - remember, I'm just a newbie at this!  LOL  I think I've got it ... so let's see ...

Posted by RetroSandie at 9:56 AM 8 comments:

Since I just discovered this myself today, I thought I would mention it.  I decided today would be a good one for starting to clean up and put some crafting supplies away because I FINALLY FINISHED MY CHRISTMAS SWAP SHADOW BOXES!!!!  YAY!!!  Now I just have to get them wrapped and sent off to Elizabeth.  No, no peekies.  LOL

Anyhoo, I decided to put on some music to listen to while I was busy.  I turned the TV on to several of the music channels from my cable company (in RI it's Cox Cable).  Last year I enjoyed listening to Christmas music on the "Holiday" channel.  Yeah, I know...but I thought I'd listen to that.  What a nice surprise I got when I realized it was HALLOWEEN music!!  Wow!  I heard songs that I've never heard before on this channel.

It was so cool listening to it while I put things away, cleaned and dusted and polished!!!  Some of the music was country-ish like "Honky Tonk Halloween", and lots of it sounded like from the Fifties.  There was theme music and music from scary movies that I recognized.  Music from TV shows and cartoon shows like "Casper".  Some of it sounds like "kiddy-ish" stuff, but cute.  Some maybe a little heavy metal, but it was so fun to listen to witches cackling, wolves howling, spooky sounds, scary-sounding stuff, even some pretty curdling screams!

Don't let me scare you away ... there was also lots of beautiful orchestral music that was background music for movies.  I just thought if anyone is interested, you might check out your cable TV music channels for some very appropriate Halloween sounds.  I can't imagine how they ever found so many songs to play!!

Posted by RetroSandie at 8:02 PM 4 comments:

Had a little fun today - my friend, Cathy, and I went off on a "hunt" to look at a chair she found on CL.  Unfortunately, the chair did not measure up, so we got out of there in a hurry!  On the way back we had seen a rather large Salvation Army store, so we headed there.  I was in heaven because I found some nice "pickies" to pick through!  My grandmother used to say I was "in glory hole" when I was picking through any manner of little goodies.  I sure was!  Plus, I found another retro shadow box to add to my collection!  LOL  Yes, this is becoming the home of the shadowbox!  So, I'll share with you my goody pile.

Here are shots of my other two shadow boxes ...

Hello all!  This marks the very beginning of my blog.  I hope you will bear with me through these beginning stages of blogdom.

~An introduction to the girls ...

Have a wonderful weekend!!!

RetroSandie
North Providence, Rhode Island, United States
Hello~I love creativity...in myself and that of others. To create is to live! Making things (from crocheted purses, artist mini-teddies, to beads and embroidery, dollies and little creatures, jewelry, papercrafts and more)is always a joy for me. If I can add retro bits and touches, it makes me even happier! I'm a cat person, and I love my 2 girls~a Ragdoll named Johnny Belle Depp; and a Maine Coon named Frankie Albertina. I enjoy meeting other creative people! I AM Retro! My favorite time is that of the 50's and 60's...the time I grew up in...that makes me RETRO because I lived through it!!